When you first start playing Subnautica Multiplayer, the first touchpoint is the Nitrox Launcher. It provides direct access to all the mod features, including starting multiplayer, creating a server and the console while you host a server session.

Hi there, I am Rux! I am a professional UX & UI designer. I am very passionate about creating great interfaces. In my free time, I do most of the design work you see across the Nitrox mod project.

The current interface works well, although it is limiting. This started the redesign project, alongside the new website to create a consistent design language.

Our first problem with the launcher was scalability. While the main functions were easy to access, it did prove to be a challenge to add more elements to the individual screens. Part of this issue is a full background image, that was initially meant to give the player immersion but ultimately it made it harder to scale the page.

Before we get into the redesign, enjoy some memorabilia above with some old launcher designs made by the developers before we had a cohesive design across Nitrox, as shown above.

With these requirements and challenges, we started to redesign the launcher. Keeping the base structure, such as main sidebar navigation, large accessible play buttons and a clear interface.

Moving the image to the top, giving the launcher a header was a great way to allow a more flexible page while keeping the immersion of the previous design.

It also has the benefit of making the text more accessible. Moving the text of the image did increase the contrast ratio for better readability and allows space to design fun illustrations like below:

To further improve the experience, a new introduction of icons was added to the sidebar menu. A set of material design icons for easier navigation and recognition between the different pages.

We designed the launcher completely using Figma. This allows for a great and seamless collaboration between designers and developers. Exporting assets, icons, images can all be done in one app.

With the new launcher, we also introduced a new font: Open Sans. This font was used on the website and gives the launcher a more friendly, approachable feeling, compared to the previous Roboto font.

I really hope you enjoy the new launcher design, and please do feel welcome to give your feedback and ideas at any time. We love improving and the best way is through player feedback! 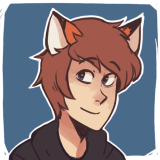 Hello I'm Rux! UX/UI designer from London, based in Germany.

Ken, thank you for your kind words — I am glad to hear you like the redesign! 😀